Rachel ran a series of regular monthly workshops for saxophonists at the Vortex. The workshops involved playing in groups of different sizes, exploring different elements that might be utilized when improvising and promoting listening and interacting skills. Different prompts were used to spark ideas for improvising, and background examples of other musicians working in this field were listened to. The workshop provided a forum for people to discuss their experiences of playing in this way, and created a friendly and welcoming atmosphere.

Here are the complete sets from our annual extravaganza.
Despite the snow a good time was had by all!

Some pictures taken by Phillippa Howarth from our November 2010 workshop which took place in the afternoon before our regular evening concert: This took place on November 16th at The Vortex with the first part led by John Russell and the second by Richard Barrett. It was attended by 17 musicians playing a range of instruments and apart from introducing different ways to think about sound and group playing in free improvisation, gave an opportunity for the participants to team up with like minded players.

From the initial instruction, ‘Let´s move some air!’ the free piece that followed then led to a break down of some of the elements involved in playing including dynamics and texture, then moved quickly through a general explanation and playing strategies adopted by John Stevens and Günter Christmann with participants playing ‘Search and Reflect’ and ‘Four Short Pieces’.

After the break Richard took some of these elements and developed them further, dividing the whole ensemble into sections and showing different ways in which they could respond to each other and also worked with ways in which dynamics can have an effect on group material.

About half of the group came to the evenings concert and all expressed an interest in coming again. Here are some of the emails we received after the workshop.

“I just wanted to contact to say how much I enjoyed the improv workshop on Sunday. I got a lot out of it and would be interested in attending future sessions if they occur.” – Pete

“Just a quick note to let you know how valuable I found Sundays workshop.

“In my opinion workshops within this music should be taking place all the time around this country, there are so many musicians who have invaluable knowledge and experience and the non-hierarchical, completely democratic approach taken through this process promotes not only artistic communication but realistic social change.

“On a personal level, because of this workshop, I met a drummer who was interested in playing some guitar & percussion duo music, something I have wanted to do for a while now.

“Thank you to everyone who ‘took the time out’ to make this day possible.” – David

“This is just a quick email to say how much I enjoyed the Mopomoso free improvisation workshop on Sunday. It got me thinking a lot about different aspects of music and interaction, and I would definitely attend again.” – John

“The workshop at the Vortex was great. I have been looking for opportunities to play Jazz with others for a while and I haven´t found much until now. The style of improvising was also really new and interesting to me.

“It would be great if there were more workshops, like this and in other styles, at the Vortex and I would definitely come along.” – Charlie

The workshop leaders were:

Richard Barrett has led workshops in improvisation in Holland, Belgium, Germany and Australia and is currently Professor of Music at Brunel University where improvised music forms a central aspect of his teaching work.

John Russell has given workshops in improvisation for Bedfordshire Education, The Cheltenham Jazz Festival and as offshoots to his own Quaqua projects. He has also taught Jazz guitar at the City Literary Institute and worked in youth and adult education schemes for the London Borough´s of Camden, Harringey, Westminster and Wandsworth.

On June the 21st vocalist extraordinaire Phil Minton gave an afternoon workshop for skilled and unskilled singers who then played the opening set in the evening concert. A video from part of this concert can be seen at YouTube. 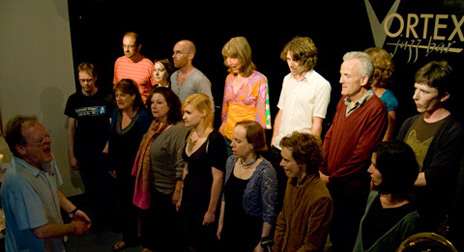 Following on from the success of  Fête Quaqua and to coincide with this year´s London Jazz festival, Mopomoso host an extended concert with a distinctly Anglo-Japanese flavour, again under the banner of guitarist John Russell´s Quaqua (note the early start). With cutting edge music from a changing pool of some of the finest and most innovative improvisers around, playing in an environment where creativity is given full reign, this marks the UK debut appearances of violinist Hideaki Shimada and pianist Yoko Arai.

Jump to videos of all sets

Max Eastley (self made instruments)

Max combines kinetic sound sculpture and music in a unique art form. He has exhibited his sound installations internationally, and collaborated with artists, musicians and film-makers including Brian Eno, David Toop and Peter Greenaway. His installations have been included in Sonic Boom at the Hayward Gallery, London, Sound as Media, Tokyo, and more recently in Riga, Latvia, in collaboration with sound engineer Dave Hunt.

Satoko started the violin at the age of seven and at nine came over to England to study with Catherine Lord. In 1997, she was invited to study at the Yehudi Menuhin School on full scholarship with Natasha Boyarskaya and Lucia Ibragimova. During this time as a soloist she made her television appearance in Japan, was invited to perform at the Wigmore Hall and the Royal Opera House with her Quartet and led the Menuhin School orchestra through Live Broadcast for Classic FM and the Menuhin Festival tour in Switzerland as well as at the Royal Albert and Queen Elizabeth Halls. She was awarded the Concordia Serena Nevill prize for 2007.

Dominic began playing bass guitar in 1994 and took up the double bass in 2001. Since then he has been in much demand for his improvising skills, performing extensively in the UK, Europe and the USA.  Festival appearances include Akbank Jazz Festival (Istanbul), Huddersfield Contemporary Music Festival, Konfrontationen (Nickelsdorf), Manchester Jazz Festival and Tampere Jazz Happening. His work has been broadcast on a number of radio stations, including BBC Radios 1 and 3 and Germany´s SWR2.

Henry was one of the first musicians on the British jazz scene to experiment with free improvisation with a.o Lyn Dobson, Jack Bruce and John Hiseman. He played in the original Mike Westbrook band (which included Mike Osborne and John Surman), John Dankworth and on the Kenny Wheeler album ‘Windmill Tilter’ while also working on the rock scene with Manfred Mann, John Mayall and Keef Hartley, with whom he appeared at the Woodstock festival.

Henry´s musical breadth is confirmed by frequent engagements with major symphony orchestras and ensembles, including the London Brass Virtuosi, the London Philharmonic Orchestra, the City of Birmingham Symphony Orchestra, the London Sinfonietta and the Matrix Ensemble. Henry was for five years the solo flugelhorn player with the strings of the BBC Radio Orchestra, and as a session musician he has recorded with Simon Rattle, Elton John, Paul McCartney, George Harrison, Van Morrison, Henry Mancini, Bing Crosby, Nelson Riddle and Talk Talk amongst many others. He is one of only two or three players in the world to have had the honour of playing lead trumpet with both Gil Evans and George Russell. In the last few years Henry has led his own band ‘Still Waters’.

Since graduating from the Guildhall in 1996 Hannah has been devising music & sound within theatre and dance and working extensively as a much respected improviser on the European scene. Amongst others she plays in a trio with Veryan Weston and Satoko Fukuda, a sextet with Alexander Hawkins, Orphy Robinson, Dominic Lash, Javier Carmona, Otto Fisher and a nquartet with Liam Noble, Mark Sanders, and Chris Batchelor. She played on Polar Bear album ‘Held on the Tips of Fingers’.

Phil joined the Mike Westbrook group in 1963 as trumpeter / vocalist followed by a stint in dance bands before rejoining Westbrook in 1972 until 1984. For the last 30 years he has worked with most of the world´s leading improvising musicians and been guest singer for many composers´ pieces. He was a Nesta awardee in 2005 and in the last 15 years has traveled to many countries with his ‘Feral Choir’ – a workshop and concert for all people who want to sing.

John got his first guitar in 1965 while living in Kent and  beginning to play in and around London from 1971 onwards. An early  involvement with the emerging free improvisation scene (from 1972)  followed, seeing him play in such places as The Little Theatre Club,  Ronnie Scott&acut;s, The Institute of Contemporary Arts, The Musicians´ Co-Op and the London Musicians´ Collective. From 1974 his work extended  into teaching, broadcasts (radio and television) and touring in the  United Kingdom and abroad. He founded Quaqua in 1981.

Hideaki lives on the West coast of Japan, in Kanazawa. He received violin tuition from infancy through to his mid-teenage years, when, in the late 1970s he became interested in the improvised music scene in Europe (Evan Parker, Derek Bailey and others). In or around 1982 Shimada met Masami Akita (Merzbow), associating Shimada with arguably some of the most challenging art and artists active in Japan at this time. His solo work since 1986 has been described as both Noise and Music; Avant-Garde and Minimalist; nervous and mellow; frantic and still; hectic and calm.

Roger has been working as an improvising musician since the early 1970´s : solo work, collaborations with experimental rock musics and open-form songs, extensive work with dance, film and visual artists. workshop formations and the hands-on politics of independent record labels and work situations, plus involvements in numerous jazz based ensembles have all contributed to this process.

He has collaborated with many of the finest European and international musicians from Annette Peacock to Phil Minton, Cecil Taylor to Keith Rowe; tours and concerts have been throughout Europe, Australia, Canada, U.S.A. Mexico, China and Japan.

Originally used as a name for a weekly club for improvised music, the first actual Quaqua groups performed in the early 1980’s under the heading ‘Fête Quaqua’ at the now defunct London Musicians´ Collective building in Camden Town. The basic idea then, and behind most Quaqua projects now, is to extend existing collaborations / relationships between musicans in juxtaposition with new ones and thus provide a fertile ground for free improvisation. This was an extension of the way a number of us had been working at the Little Theatre Club and the London Musicians´ Co-Op concerts at the Unity Theatre from around 1973 onwards, where personnel changed from concert to concert from a pool of musicians with different approaches, who shared a love of free improvisation. (One notable exception to this modus operandi was the group ‘News from the Shed’ which initially was named ‘Quaqua’ for a UK tour.) ‘Quaquaversality’ means to point in all directions and the name ‘Quaqua’ is Latin for ‘whithersoever’.

Videos – in order of performance